Gulmohar flowers announce the arrival of monsoon. Its bright red colours are
a harbinger of good times.

My harbinger of a good time has been my recently purchased bicycle. It is a kind of bike that is popularly known as a road bike. With a sleek and sexy body, they are the elites of the cycling world. They are the gatekeepers against which others are judged.

The bug of purchasing a real road bike came to me when a friend offered to sell his old Colnago steel frame road bicycle. The offer was made just before I was leaving for the field to the Andaman Islands and on my return, I found that the bike was no longer available. With a bit of disappointment and the feeling of failure, I started searching for road bikes that are available on the Indian market. On some occasions, I would stay awake reading reviews about different bikes, and on others, I would try bicycles at different bicycle shops.

After two months of searching, I was unable to make a decision as there were too many options available on the market, and the only one that stood out was out of my budget. I contacted some veteran cyclist Lena Robra, Shrdha Rathod and Ashok Captain and got their opinion on a few models that I had shortlisted. I test rode a variety of bikes and decided that I will go with Focus or Marin bicycle.

It was on this journey of reviewing bikes that I came across the second-hand bicycle Triban 3 by Btwin. I jumped at the opportunity and contacted the owner, Akarsh Agrawal. We decided the place and time where we would meet. The test ride was not as smooth as I had expected, but what I saw was fairly close to what I was expecting– an alloy body, carbon forks, Shimano Sora shifters, an aggressive road bike position and a sturdy body. Without wasting any time, I sealed the deal with Akarsh who was generous and gave me a lot of other essentials that go with the cycle including a torch, tube, saddle bag, pump, puncture kit and so on.

On my return, I took it to the nearest service centre, and since then I have been riding the bike with the confidence of the Winner of the Tour de France. When the bike was new, I didn’t want to name it, but as I got comfortable, I thought the name is must. After all, a name means nothing, and a name means everything. To name a thing is to invite it to enmesh itself in your mind; to compress the essence of a gestalt into a single suggestive motif, from which it can be revived at will.

After much contemplation, I called my bicycle ‘Gulmohar’ after one of the most common flowering trees in Bangalore. In addition, the area where I cycle—Sahakar Nagar, Yellahanka, GKVK campus, has lots of Gulmohar trees. With flat roads and relatively less traffic, the cycling is a fun-filled activity. 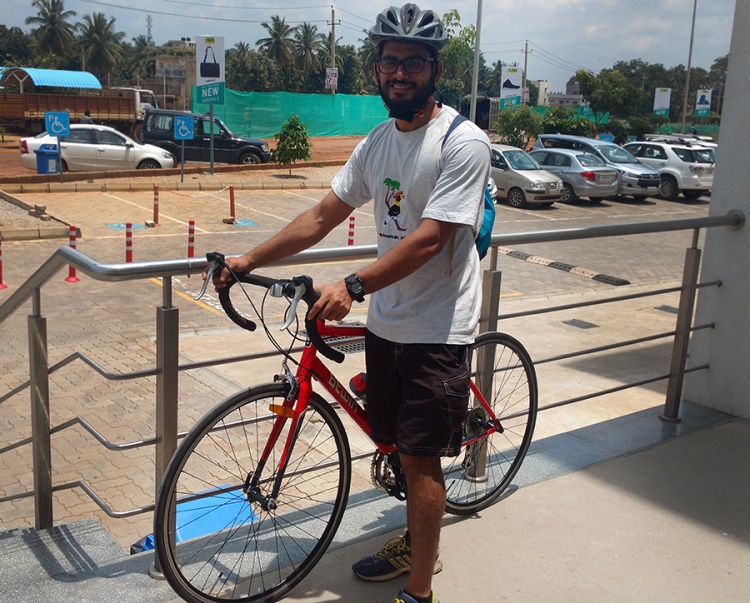 To me, Gulmohar is a dream that floats around the fringes of my imagination, a eulogy of the efficiency, technological triumph, and sheer beauty draped in bridal red. Riding Gulmohar brings me to the same feeling of elation that comes with gliding over colourful reefs. Gulmohar reminds me of re-committing myself towards a fitter life, and thus a beginning for new things to come.

I am sure I am not the only one with “Gulmohar” out there, but every bicycle lover probably feels the same way about the bicycle they own.